WWW Wednesdays is a bookish meme, hosted by MizB at Should Be Reading. To play along, just answer the following three (3) questions…

What are you currently reading? I'm reading Wives and Daughters by Elizabeth Gaskell! There is a light at the end of the tunnel!!!

What did you recently finish reading? Partners in Crime by Agatha Christie, Hex Hall by Rachel Hawkins and Fantastic Mr. Fox by Roald Dahl.

What do you think you'll read next? The No. 1 Ladies Detective Agency by Alexander McCall Smith and probably something classic. :D 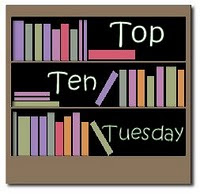 Top Ten Tuesday is hosted by The Broke and the Bookish. This weeks theme: Top Ten Most Dislikable Characters! Yeah I love to write about characters I hate! Let the fun begin.

1. Bella Swan From The Twilight Saga: Tis a given, so I won't go into the gory details. Possibly one of the weakest most co-dependant character to be created.

2. Bellatrix Lestrange From the Harry Potter Series: Yup, Lestrange is right! This insane and sadistic Voldemort supporting is first introduced in HP 4 as a psycho prisoner sent to Azkaban while Harry's chilling inside Dumbledores memories. Ever since then she's appeared in every book to create merry mayhem. SPOILER! I really hate this character particularly in the 5th book in a rather chilling scene when she tortures Neville Longbottom reminiscent of when she helped torture his parents into insanity. END OF SPOILER!

3. Bill Sikes from Oliver Twist: This abusive, murderous, character scared me to death when I was little and first read OT. I can't really remember much about him except that I hate him.

4. Isabella And John Thorpe from Northanger Abbey: These two annoying siblings really got on my last nerve. They were manipulative, only using Catherine and her brother to get what they want.

5. The Character of Wuthering Heights: An ever popular one. Never has there been so many selfish, self obsorbed, abusive, masochistic, people in one book. While you can't care for the characters in WH it's still a fast paced classic novel, well worth reading for it's plot and writing. It's one of my favorites.

6. Prince Humperdinck from The Princess Bride: A "fine" example of a bully and a coward who gets in the way of true love. Terribly annoying villain.

7. Elsie Father from the Elsie Dinsmore series: I don't remember his name, but anyway I've always hated him. A complete jerk of a father who leaves his kid with a relative, and then decides to come back into her life when it suits him, and demands blind and immediate obedience of which he does not deserve. He's suppose to improve in the book series and I read 3 of them and saw no such "improvements".

8. Princess Mia from The Princess Dairies: She was a bit too self absorbed and boy crazy for my taste.

9. Gwedolen Chant from Charmed Life: A selfish witch who is not above using and hurting her brother to get the attention of famous magician Chrestomanci. She was really bratty and terrible throughout the whole book.

10. Sally Lockhart from Ruby in the Smoke: I cannot stand this book, and mostly because Sally is one of the most colorless, uninteresting characters I've had the misfortune of reading. As much as they try to build her up as an independent woman she just ends of falling flat, and having other people solve her problems.

Jotted down by Lady Scribbles at 9:51 AM