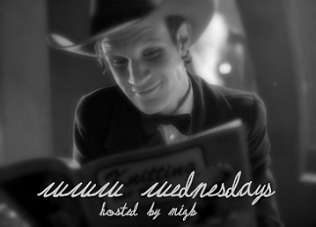 WWW Wednesday is hosted by mizB at Should Be Reading. To play along, just answer the following three (3) questions…
What are you currently reading? I am reading Hogfather by Terry Pratchett. Thought I'd be seasonal.
What did you recently finish reading? Lots of chick-lit. The Undomestic Goddess by Sophie Kinsella and Angus, Thongs, and Full-Frontal Snogging by Louise Rennison. Double packed review coming soon...I also read How Not to Write a Novel: 200 classic mistakes and how avoid them by Howard Mittlemark and Sandra Newman. It was very eye opening, and utterly hilarious.
What do you think you'll read next? Well I hate to swear because I've mostly been lying the past couple months, but I'm pretty sure I'm gonna read Goodbye Mr. Chips by James Hilton...and then I'm really not sure. Sky's the Limit eh?

Jotted down by Lady Scribbles at 5:16 AM 2 comments: 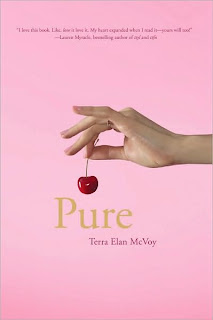 Tabitha and her four best friends all wear purity rings, symbols of the virginity-until-marriage pledge they made years ago. Now Tab is fifteen, and her ring has come to mean so much more. It's a symbol of who she is and what she believes—a reminder of her promises to herself, and her bond to her friends. But when Tab meets a boy whose kisses make her knees go weak, everything suddenly seems a lot more complicated. Tab's best friend, Morgan, is far from supportive, and for the first time, Tabitha is forced to keep secrets from the one person with whom she's always shared everything. When one of those secrets breaks to the surface, Tab finds herself at the center of an unthinkable betrayal that splits her friends apart. As Tab's entire world comes crashing down around her, she's forced to re-examine her friendships, her faith, and what exactly it means to be pure.

My Review: This books was of great interest to me on many levels. I got it out on a gamble. I had an idea of how it would go, and then how I hoped it would go, and I read it a little prepared to be disappointed. Fortunately I wasn't. Despite the summary, and the question of purity that does permeate the book I would have to say this particular novel was definitely more about the challenge of friendship, staying true to what you believe, being open minded, and peer pressure, no matter if it's "good" or "bad".

The main character Tabitha, was wonderful. She was realistic, strong, and thoughtful, wonderfully mature but still young in many ways protagonist now a days are not. She's a thinker, never one to see things at face value she delves deeper into the issue, looks at both sides, questions, and it was great to read about a young girl being this way about issues she faced like friendship, and sex.

We have lovely side characters to that are also fleshed out. All of her friends, Cara, Morgan, Naeomi, and Priah each share a very special friendship with her that helps all of them grow in ways they never expected. Even Priah, probably who is really in the background for most of the story gets a chance to shine in the end. I love their individual voices, and I felt for them.

Tabitha also got a boyfriend, who was very understanding, but also a bit in the background, just there for Tabitha to question herself even more.

Her parents as well were not regulated to the background, and added a nice touch, so often authors forget the parents, and they're merely there for the protagonist to despise or "feel sorry for" so we think they actually care, and then are never mentioned again. Tabitha talks to her parents. That was another lovely thing to read.

The books is quite hefty, but in my personal opinion never dragged. I really enjoyed every second of it, it made me think.

As a note: religion plays an important part in the book, but it's not overpowering or "beat you over the head" type. I think it adds a very nice touch.

Content: kissing, despite the subject matter it is not graphic, perfect to give to young girls having to start thinking about these things without freaking them out.

Recommend: To those who want to weigh in all the options, and are curious to look at it from a religious but un-fanatical viewpoint. Also to those who love friendship stories, which is the core of the book.

P.S. This is the first review I've written on my new laptop. Very exciting. :P
Jotted down by Lady Scribbles at 4:52 AM 1 comment: