Enola Holmes: The Case of the Gypsy's Goodbye Book Review 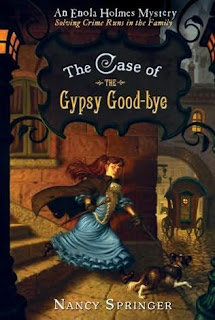 Title: The Case of the Gyspy's Goodbye

Reading Level: Ages 12 and up

No one, not even Sherlock, is left unchanged or unsurprised in this brilliant conclusion to the Enola Holmes mystery series.

My Review: I'm really sad this is the last one. It was such a fun series to read. I had a lot of fun with Sherlock Holme's much younger sister. She was as ever a strong, and clever heroine, a credit to her family name. In this, the last book, Enola continues her job as a scientific perditorian who recovers missing people, but she is joined by her brother Sherlock who is working on the same case. I think the author did a decent job in portraying Sherlock as a confused older brother, trying to put aside his old english sensibility in order to understand his modern sister-sibling. As for the other brother Mycroft, well he hasn't shown up in any of the classic SH books I've read so I dunno if he was portrayed well or not. I think his acceptance of Enola was a bit rushed especially since it took Sherlock a fairly long time. But it was the last book, and thing's needed to be tied up. Speaking of which we find out what happened to Enola's mother and why she left her, and I enjoyed the closure as I'm sure other fans of the series will. The mystery wasn't quiet as sophisticated as the first and second novel's in this series, and I also am not a fan of returning bad guys, but other than those little critiques it was a fun, and interesting book. I finished it in one day. :) Yes I'm proud of that.
Content: Some violence
Rating: 3 stars out of 5
Recommend: To fans of the series and parents looking for good mysteries for their children.

Jotted down by Lady Scribbles at 4:44 PM