WWW Wednesday is hosted by MizB over at Should Be Reading. Join in on the fun by answering these 3 questions:
1. What are You Currently Reading? "Solid" by Shelley Workinger and Still P&PAZ by Seth Graham-smith and Right Side Talking by Bonnie Rozanski although I'm almost finished that one.
2. What Did You Recently Finish Reading? My Unfair Godmother by Janette Rallison and No Passengers Beyond This Point by Gennifer Choldenko.
3. What Do You Think You'll Read Next? Probably Miss Peregrines Home for Peculiar Children by Ransom Riggs and tons of other books I need to read for review. I'm terribly behind. 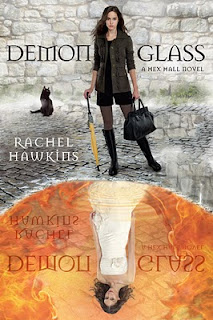 Genre: Fantasy
Reading Level: Ages 12 and up
Summary: Sophie Mercer thought she was a witch.
That was the whole reason she was sent to Hex Hall, a reform school for delinquent Prodigium (aka witches, shapeshifters, and fairies). But that was before she discovered the family secret, and that her hot crush, Archer Cross, is an agent for The Eye, a group bent on wiping Prodigium off the face of the earth.

Turns out, Sophie’s a demon, one of only two in the world—the other being her father. What’s worse, she has powers that threaten the lives of everyone she loves. Which is precisely why Sophie decides she must go to London for the Removal, a dangerous procedure that will destroy her powers.

But once Sophie arrives she makes a shocking discovery. Her new friends? They’re demons too. Meaning someone is raising them in secret with creepy plans to use their powers, and probably not for good. Meanwhile, The Eye is set on hunting Sophie down, and they’re using Archer to do it. But it’s not like she has feelings for him anymore. Does she?
My Review: I was very wary of this sequel, especially since sequels I'm excited for so often disappoint me. Especially if in the sequel they take the characters to England. But I have to say although I wasn't entirely blown away by it, Demonglass was a nice addition to the Hex Hall series. I still have a lot of faith in Rachel Hawkins writing, and if she continues on in her current path I definitely look forward to seeing where she takes this series.
The characters still had their original personalities in tact. There weren't any crazy 360 turn about like in a lot of other series I've read. New characters were added and I for one instantly loved Sophie's dad, he was very charming and caring. I think the way Rachel developed their relationship was very believable, moving it along at just the right pace. Nick and Daisy the two new demons provided a creepy mystery to keep you guessing as well as some sympathy to their predicaments. Cal (who apparently was in the first book although I don't remember him) had some very sweet scenes with Sophie but, I don't think he's a contender for her feelings.
Humor (although not as prevalent as in the first book) was sprinkled throughout the story to good affect. The plot dragged along in the beginning with a lot of exposition, but Rachel made up for it with a very exciting second half. I was a little miffed with how the book ended and some of the decisions Sophie made during the conclusion but I really can't complain too much.
Content: Some mild language I think and a little kissing
Rating: 3 stars out of 5
Recommend: To those who loved the first and any fantasy fans 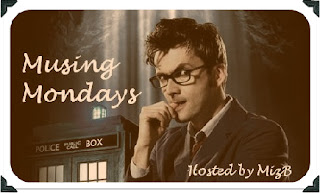 Musing Mondays is hosted by MizB at Should Be Reading. This week’s musing asks…

Where is your favorite place to read?

Ah well my favorite place to read now that the weather is fine is outside on our porch swing. For some reason rocking back in forth helps me to fully relax and get into the story I'm reading. If it's too hot to be out on the swing I usually read on the couch. If the TV is on I read in my room.

Jotted down by Lady Scribbles at 4:15 PM 2 comments:

It's time for another Booking Through Thursday~! This weeks question is: Do you read book reviews? Whose do you trust? Do they affect your reading habits? Your buying habits?
Book reviews are wonderful, I read them a lot. Not as much as books but pretty close. I love to read snarky reviews, because I love to laugh, but I also like them to be constructive as well. I read reviews mostly on other blogs, amazon, and goodreads. As long as a review doesn't simply read "WORST Book EVAH~!" or "BEST Book EVAH~!!" I will generally take their opinion into consideration before deciding what book to read. I'm somewhat wary of reviewers who seem to like every book that comes out, I'm not sure I can entirely trust their judgement. When it comes down to it though, I usually decide if I can deal with what people say is bad about the book. I'm very cautious about the books I buy, because I want to buy something I will like, something I would love my children to eventually read. If a majority of reviewers say a book is supremely excellent or even very cute I will give it a chance and actually buy it. Most of the time though, I feed my need to read at the library. :D

Jotted down by Lady Scribbles at 6:59 AM 3 comments: