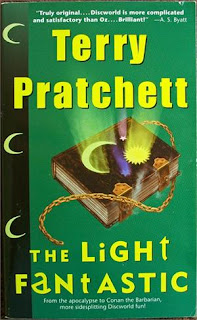 Title: The Light Fantastic
Author: Terry Pratchett
Genre: Fantasy
Reading Level: ages 13 and up
Summary: "What shall we do?"
said Twoflower. "Panic?" said Rincewind hopefully. He always held that panic was the best means of survival.When the very fabric of time and space are about to be put through the wringer – in this instance by the imminent arrival of a very large and determinedly oncoming meteorite - circumstances require a very particular type of hero. Sadly what the situation does not need is a singularly inept wizard, still recovering from the trauma of falling off the edge of the world. Equally it does not need one well-meaning tourist and his luggage which has a mind of its own. W
hich is a shame because that’s all there is…
My review: This is the second Discworld novel I have read and I am now a full blown fan. This one was lighter, and funnier than The
Hogfather. You can tell these are early series books, not only because of their life tone but they're shorter too. :P The story is simple but quirky and the characters are fantastic, even Rincewind the cowardly wizard, and especially the enchanted temperamental luggage. This is a fun read filled with snappy little quips that you should definitely pick up if you have the chance.
Content: Language
Rating: 4 out of 5 stars
Recommend: Yes~! 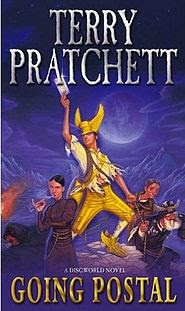 Title: Going Postal
Author: Terry Pratchett
Genre: Fantasy
Reading Level: ages 13 and up
Summary: Arch-swindler Moist Van Lipwig never believed his confidence crimes were hanging offenses - until he found himself with a noose tightly around his neck, dropping through a trapdoor, and falling into...a government job?
By all rights, Moist should have met his maker. Instead, it's Lord Vetinari, supreme ruler of Ankh-Morpork, who promptly offers him a job as Postmaster. Since his only other option is a nonliving one, Moist accepts the position - and the hulking golem watchdog who comes along with it, just in case Moist was considering abandoning his responsibilities prematurely. Getting the moribund Postal Service up and running again, however, may be a near-impossible task, what with literally mountains of decades-old undelivered mail clogging every nook and cranny of the broken-down post office building; and with only a few creaky old postmen and one rather unstable, pin-obsessed youth available to deliver it. Worse still, Moist could swear the mail is talking to him. Worst of all, it means taking on the gargantuan, money-hungry Grand Trunk clacks communication monopoly and its bloodthirsty piratical head, Mr. Reacher Gilt. But it says on the building Neither Rain Nor Snow Nor Glom of Nit...Inspiring words (admittedly, some of the bronze letters have been stolen), and for once in his wretched life Moist is going to fight. And if the bold and impossible are what's called for, he'll do it - in order to move the mail, continue breathing, get the girl, and specially deliver that invaluable commodity that every human being (not to mention troll, dwarf, and, yes, even golem) requires: hope.
My Review: The 3rd book in my Discworld reading, and another fab outing. This one introduced me to Moist Von Lipwig, lovable con man, and his new life after death job at the post office. Throughout the book he thinks up clever little ways to get people to like him, and become successful. He's obviously driven when it comes to a difficult task, there's always a sly way he goes about getting people to do things for him. He's never entirely honest, and nor does he [spoiler] change too much in the end. But really once you get to know him would you want him too?
We've headed into the later years of discworld which means 1. Thicker spines. The funny thing is each time I read a new discworld book, the style is fresh, it feels like he's trying out some new form of writing, so that it never quite reads like the other ones. Being relatively new to Discworld this may be because I've been doing a lot of hoping around from the early years to the later. Perhaps when I read them all I'll find a common thread, a slow change from the first book to the newer ones that tie the different styles together.
Again as far as plot it's pretty much him working on the mail room, and that leaves itself open for plenty of shenanigans, but there are bits of conflict near the end, and a fun little love story for romantics. The characters are all suitable missing a few marbles, or very devious, and I wouldn't take them any other way. This is Discworld, larger than life, exaggerated beyond compare, and it's utterly brilliant.
Content: language
Rating: 4 out of 5 stars
Recommend: Yes!
Jotted down by Lady Scribbles at 5:04 AM 21 comments: 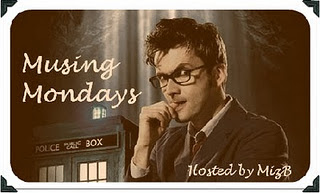