The Undomestic Goddess and Angus, Thongs, and Full-Frontal Snogging 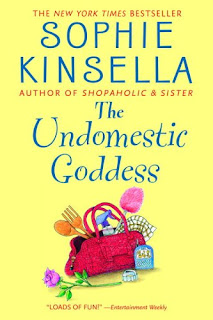 Author: Sophie Kinsella
Genre: Comedy
Reading Level: Vocab wise, anyone, content wise Adult
Summary: Workaholic attorney Samantha Sweeting has just done the unthinkable. She’s made a mistake so huge, it’ll wreck any chance of a partnership.
Going into utter meltdown, she walks out of her London office, gets on a train, and ends up in the middle of nowhere. Asking for directions at a big, beautiful house, she’s mistaken for an interviewee and finds herself being offered a job as housekeeper. Her employers have no idea they’ve hired a lawyer–and Samantha has no idea how to work the oven. She can’t sew on a button, bake a potato, or get the #@%# ironing board to open. How she takes a deep breath and begins to cope–and finds love–is a story as delicious as the bread she learns to bake.

But will her old life ever catch up with her? And if it does…will she want it back?
My Review: Much like Shopaholic this was easy to read and funny. Not as funny as shopaholic and I didn't like it as much, but it was okay.
It wasn't very believable, as the main character who's supposed to be a lawyer, actually fakes her way through cooking, and then gets insanely good after only 2 weeks. Wow... it should only happen to me.
Also I didn't like the ending, I felt i
t was too predictable (and no I'm not talking about romance wise) and a bit of a cop-out for the main character. It was also cliche. The seemingly innocent character, a blackguard all along...hohum.
The middle dragged. Terribly. Then it got boring near the end and I didn't care.
But the beginning was funny.
Content: Harsh language, and a scene I hadda skip over because I don't care about anyone's blimey amour midst the shrubbery.
Rating: 1 and a half stars out of 5
Recommed: Kinsella fans...possibly 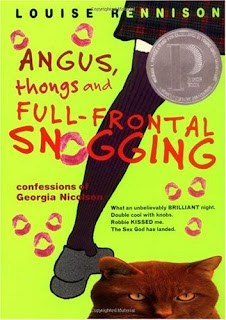 1. I have one of those under-the-skin spots that will never come to a head but lurk in a red way for the next two years.

3. I have a three-year-old sister who may have peed somewhere in my room.

4. In fourteen days the summer hols will be over and then it will be back to Stalag 14 and Oberfuhrer Frau Simpson and her bunch of sadistic teachers.

5. I am very ugly and need to go into an ugly home.

6. I went to a party dressed as a stuffed olive.

In this wildly funny journal of a year in the life of Georgia Nicolson, British author Louise Rennison has perfectly captured the soaring joys and bottomless angst of being a teenager. In the spirit of Bridget Jones's Diary, this fresh, irreverent, and simply hilarious book will leave you laughing out loud. As Georgia would say, it's "Fabbity fab fab!"

My Review: Yes, that up there really does summarize the book. It really was just the ramblings of a 14 year old girl. A rather dim if not funny 14 year old girl. Seriously, I do not know why a girl her age, in public school, is so dim. I mean seriously, she just lets guys do whatever to her, it was so frustrating she didn't kick that Mark character.

Also Georgie, her friends, and seriously anyone besides her Dad in this novel had no aspirations. At all. In fact I don't think it even mentioned there interests. Does Georgia have any?

The writing was super easy, and as I said, funny, but in the end it was all empty calories.

Content: kissing, lots of kissing, it was kinda gross. Georgia lets guys touch her inappropriately which made me really mad I wanted to slap her...

Jotted down by Lady Scribbles at 4:28 AM