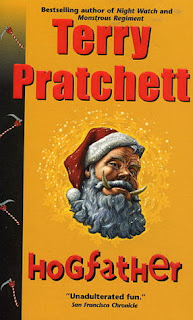 Author: Terry Pratchett...it's in big red letters on the book cover over there. Makes you think the book is called Terry Pratchett and it's written by Hogfather.
Genre: Fantasy/comedy
Reading Level: Ages 12 and up
Summary: Who would want to harm Discworld's most beloved icon? Very few things are held sacred in this twisted, corrupt, heartless -- and oddly familiar -- universe, but the Hogfather is one of them. Yet here it is, Hogswatchnight, that most joyous and acquisitive of times, and the jolly old, red-suited gift-giver has vanished without a trace. And there's something shady going on involving an uncommonly psychotic member of the Assassins' Guild and certain representatives of Ankh-Morpork's rather extensive criminal element. Suddenly Discworld's entire myth system is unraveling at an alarming rate. Drastic measures must be taken, which is why Death himself is taking up the reins of the fat man's vacated sleigh . . . which, in turn, has Death's level-headed granddaughter, Susan, racing to unravel the nasty, humbuggian mess before the holiday season goes straight to hell and takes everyone along with it.
My Review:“You need to believe in things that aren't true. How else can they become?”
Terry Pratchett's engaging and hilarious novel not only presents you with a lovely and quirky fantasy, but also plenty to talk and think about when you're finished reading. The discussion of belief, blind faith, and it's importance to humans, and the existence of the world even, are very prevalent, and put about in a way that you hardly realize that's what you've been reading. I loved the parts where they explained the origins of the Hogfather, and how (not unlike our own) started off as something much darker, before it became the happy little festival that is so well known. It's clever, touching, and so well written.
The world in this book is fully released, probably because this is the 20th book in the discworld series. But you don't have to read them in order. Since Discworld is an alternate universe it's fun to see all of "mythologys" in play as their world (which is flat) travels through space on the backs of 4 elephants on the back of a giant turtle.
Discworld is populated by hundreds of characters, and this book has quite a few of them on its own, you jump from each one of their stories quite a bit, and I wasn't entirely sure if it a was sequential, so that was a bit confusing. In a good way of course because you wanted to know what was going to happen and near the end you are largely rewarded. I feel like this is one of those books you have to read again to fully appreciate, and that you'll get a lot more on the second helping then you did on the first.
The main protagonists Death and Susan, both relatives, and both holding fantastic power are wonderfully imaged characters. Susan is a bit stodgy, a common side affect in fiction when someone who isn't normal tries so hard to be. But she was fantastic, perfectly capable of setting aside normalcy to beat up monsters in a cellar with a poker if the occasion called for it. Also her hair did itself. You can't help but like someone like that.
Death is brilliant, and talks in CAPS so you don't miss anything he says, and he's hilarious, and dark, and surprisingly has a "heart". His attempts at portraying the Hogfather, especially in the "Maul" are some of the best parts of the novel to get you laughing.
There are fumbling wizards with a temperamental giant computer, some ill fated thieves, a creepy man-child, a Death of Rats, talking Raven, and oh yes, a god of hangovers.
Seriously what more could you ask from a book.
Content: language, violence
Rating: 4 stars out of 5
Recommend: It reads slightly like the Hitchiker's Guide to The Galaxy. If you liked that I'd safely bet you'd like this.

Jotted down by Lady Scribbles at 11:20 AM